Ultra Liquor’s wine buyer Mark Norrish is a player of note: he plays a mean game of boulle; he plays skilled negotiator and he plays the stock markets - he is often ahead of the curve. Long before the age of austerity Mark was ferreting out great value-for-money wines including from South America.

Members of the wine trade resent paying full prices for wine, it’s a valuable wine fact and we love trade exchanges. One of the few regrets I have since entering the trade is finding great wine at great prices – not anymore.

A recent tasting of Mark’s selections was nothing short of mind-boggling. Own brand Secret Cellar 2007 Blanc de Blanc was delicious and the price of R49.99 made it absolutely delicious. Ja that’s 2007 and R49.99! But that’s not all, this wine’s complexity is enhanced by some oak on the base wine and extended lees contact in the bottle. Ja R49.99 and four stars in Wine Magazine.

Your suggestion that the Top 100 panel is weak reveals just how your judgment is lacking. How you can call yourself an independent wine writer is laughable. You use your employer’s platform in highly personal attacks where you also support the interests of your friends and their clients.

Your attacks on WOSA are rabid. You are a gossip columnist masquerading as a wine writer whose first audience is search engine optimisation. Like the Parlotone’s Giant Mistake, you should release a wine called Giant Hypocrite. Your death throes are increasingly grotesque while you bring SA wine writing into disrepute - you should leave that to me.


Entries still not representative of the industry but its only year 2 of the competition. Top performer was Jordan with: (details of public tasting at bottom of list)

The remainder in alphabetical order

Investing in European wine has often out performed major indices and asset classes since the naughty 90s. Fine wine exchange Liv-ex 100 (http://www.liv-ex.com ) has tracked key fine wines on the open market for the last decade and has delivered a 34% year on year return in the last five years. 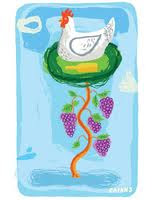 With the exception of Australia and California’s nominal market share, it’s all European, dominated by France’s Bordeaux and to lesser extent Burgundy, even less by Spain and Italy with a splash of Champagne which is always welcome in any market.

Contributing factors include rocketing demand from Asia, wine making technologies and climate change. Four of the best ever Bordeaux vintages have concertinaed into 11 years; 2000, 2005, 2009 (vintage of a century) and 2010 with talk of 2011 being the third great one in a row. Meanwhile the warmest 9 years (global) on record have been in the last 15 years.

Many of the world’s great vineyards are – or used to be - on a viticultural knife edge where vines struggle but now achieving perfect ripeness is much more likely, as is achieving prices beyond traditional buyers. The situation is becoming both a victim of its own success and as one of the symbols of our age – greater concentration of wealth.

Some buyers have abandoned the 1st growths like Latour in preference for 2nd growths – or super seconds as they are now known with prices to match or even exceed 1st growths of a few years ago. Its all constructed around what is known as en-primeur – essentially a futures platform where prospective buyers and commentators get an actual taste of their ‘contracts’ after the wines are released as futures, 6 months after the vintage on an open Bordeaux market. Depending on the quality and quantity of the vintage, prices are set and wine is allocated to be sold off around the world.

Tricks of the trade include aging a barrel or two of wine in American oak for the en-primeur taste-off which this writer witnessed in 2007 while tasting 2005 out of (French) barrels in Bordeaux – among the best wines I have tasted. Some Bordelais ague that it is actually a closer representation of how the wine will show a few years down the line, of course it can also add richness and perceived sweetness.

Besides largely lacking in the European traditions of cellaring and a richer viticultural history, South Africa’s stumbling blocks include capital gains tax and the lack of bonded warehouses which alleviate two other problems - VAT and verifying storage history – a very important caveat when trading in fine wine. It also removes the temptation of having access to your portfolio late on a Saturday night.

However, South Africa is not without its aspirational and ambitious. Kanonkop has added fresh impetus to the lean local secondary market with the release of a single vineyard Pinotage ‘Black Label’ which is trading around R1200 per bottle, above its 07 maiden vintage release price at online retailer Cybercellar.

Others worth considering include Sadie, Thelema, Paul Cluver, Meerlust, Newton Johnson, Boekenhoutskloof, and Mullineux. As a Chateaux owner once famously advised, its only the first 300 years that are difficult.