Darling, my Liefie, my Zonnebloem

Yesterday's launch of two limited range Zonnebloem wines at Rick's Cafe in Cape town was a lesson in cherry picking, smart wine making and food and wine pairing.
The Ltd Ed Sauvignon Blanc 2010 is a cracker and like so many in Wine Mag's top 10 Sauv Blancs, 75% of the fruit is from Darling (balance Helderberg, both vineyards with ocean views). This is a good example of a thoroughly modern style, intensity on the nose but with tangy palate weight rather than the leaner, racier styles (despite RS of 1.47 and TA of 6.98).

And it was a great match with the intensely flavoured starter both being more complex in the company of the other. In an African interpretation of sushi, Tataki* of sesame crusted yellow fin tuna was encased in sweet corn and cous cous and the wine was totally up for the challenge - and the garlic - and took on a flinty earthy note to match – very delish. (* usually with sesame oil, soy sauce, garlic and ginger, chef Steve van Graan's version also had de-seeded chilli and mirin). 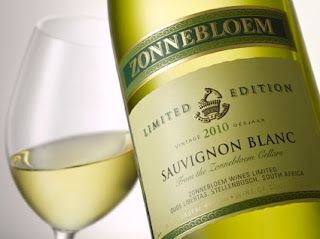 However the main was a touch too sweet for me and - for a Ltd Ed - the Shiraz could have had a touch more tannin. The other argument of course is that it’s a thoroughly modern style, lots of fruit, vanilla and mocha, which also makes it very drinkable on its own (all Stellenbosch fruit).
But between the butternut and star anis jus served with the Peppadew crusted Springbok medallions and oyster mushroom ragout; the dish was just too sweet. It did not however make the wine acidic which is often the case with sweeter food. The wine remains very drinkable aided in no small way by the perception of sweetness from alcohol and vanilla (40% American oak) and was a much better match with the venison sans jus. 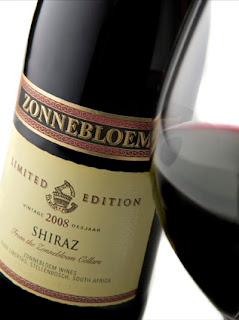 The dessert definitely made me review my vague dislike for rhubarb, one of the more fashionable veggies.* It was elegantly presented (disguised?) in a compote with strawberry and an Amarula sabayon with its signature tanginess subdued in the best possible way while again revealing the Sauvignon's versatility.
*Rhubarb Trivia
Rhubarb is botanically classified as a vegetable however, in the United States a New York court decided in 1947 that since it was used in the United States as a fruit it was to be counted as a fruit for the purposes of regulations and duties. A reduction in taxes followed so who says Rhubarb farmers are slow?
Jonathan Snashall
Posted by HGV at 00:50